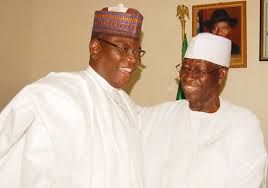 Has President Goodluck Jonathan concluded plans to dump Vice President Namadi Sambo for Governor Sule Lamido of Jigawa State as his running mate for the 2015 presidential elections? Or has he finally decided to fulfil his 2011 campaign promises to the people of Jigawa? These questions and more agitated the minds of journalists on Tuesday when the Chairman, Board of Trustees of the Peoples Democratic Party, Chief Tony Anenih, held a closed- door meeting with the governor at the state’s presidential lodge in Dutse.

The meeting was attended by some key members of the PDP, including the party’s National Vice Chairman, North West, Amb. Ibrahim Musa Kazaure.

The PDP BoT chairman while speaking with journalists at the new Dutse international Airport, shortly after the meeting, said, “I came to see my brother, who is also the state governor – Sule Lamido.

“What we have discussed in our meeting is not for tomorrow newspapers.  Sule Lamido is a party loyalist and he deserves all privileges in the party”.

Anenih, who declined to comment on speculations that the party would replace Sambo with the governor, added, “Sule Lamido is a matured leader. This my third visit to Jigawa this year and we have not seen any problem”.