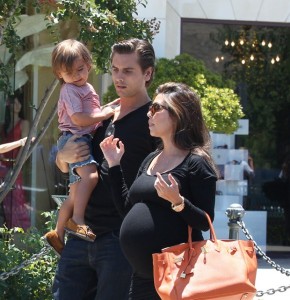 The Kardashian family would soon be welcoming another baby girl into the family, after Kim’s baby — North West.

Reports suggest that Kourtney Kardashian is over the moon has after learning she and Scott Disick are expecting a baby girl.

The ‘Keeping Up with the Kardashians’ star and her partner Scott Disick – who already have son Mason, four, and daughter Penelope, two, together – recently found out about the gender of their unborn third child and Khloe is said to be ‘thrilled’ by the news.

A close source from the family revealed that: ‘They just found out. ‘Kourtney is so thrilled; she had wanted a girl from the very start.’

According to the insider, Kourtney – who has two sisters, two half-sisters, a brother and four step-brothers – had hoped for a girl because she wanted a sister for Penelope after growing up in such a female-dominated household herself.

On a recent episode of ‘Keeping Up with the Kardashians’, 31-year-old Scott accused Kourtney, 35, of ‘suckering’ him into having another child. He ranted: ‘This is ridiculous. It is always so sneaky with you. You need to stop lying to me. You just keep suckering me into these kids. ‘I just kind of thought that at two we did not want to have any more kids and now I have to look after three. Just saying it is freaking me out.’