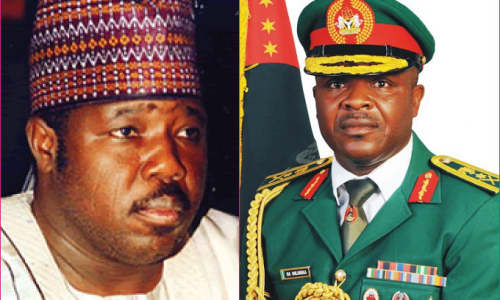 A Non-Governmental Organization (NGO) known as the Northern Emancipation Network, has called on President Goodluck Jonathan to order the arrest and probe of former Governor of Borno State, Senator Ali Modu Sheriff and former Chief of Army Staff, Lt-Gen. Azubuike Ihejirika (rtd), in the light of the revelation by Australian hostage negotiator, Dr. Stephen Davis that they are alleged sponsors of the Boko Haram sect.

A statement signed by the group’s Coordinator, Abdul-Azeez Suleiman, said the call became necessary in order for the president to repair his already battered image as a result of the insurgency.

The group said acting on Davis’ revelation would also reshape Nigeria’s image in the face of the international community.

According to Suleiman, the attempts by Sheriff and Ihejirika to wash their hands off the Boko Haram insurgency in the media should not be equated to proof of their innocence.

The group, however, also faulted moves by the opposition to make political capital out of the situation, adding that it is the peak of insensitivity to issues that concern national security.

The NGO said it was unacceptable for the opposition to lump Sheriff’s indictment on the Presidency and the Peoples Democratic Party.

“In any case, Sheriff had, since 1999 been in the opposition until just recently when he shifted to the PDP”, Suleiman said.

He also described attempts by Igbo public commentators to exonerate Ihejirika as pedestrian, advising Nigerians to stop interpreting the insurgency in tribal or ethnic terms.