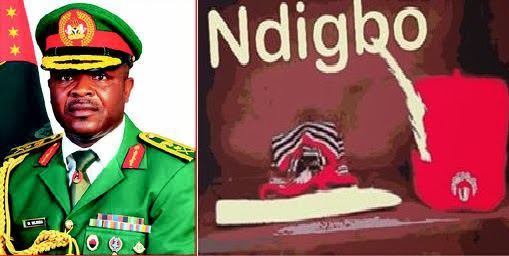 This would be the first time the apex Igbo organization would be reacting to the allegation, which was made by an Australian hostage negotiator, Dr. Stephen Davis.

While advising President Goodluck Jonathan to “fast track the recommendations of the just concluded national conference because the resolutions were what the people wanted and it was in nobody’s interest to sit on them”, Ohanaeze Ndigbo also stated that it would soon make public its position on the Igbo Presidency in the 2015 general elections.

He queried, “Why would Ihejirika sponsor people who said they want to Islamise the country? Why will he sponsor people who are killing people, including his own people? Why was he also accused of being brutal on the insurgents and that they were going to report him to the International Court of Justice?

“How can the same people who made the same allegations also accuse him of sponsoring the same people they accused him of killing? We are satisfied with Ihejirika’s service to the nation and we commend him. And we are asking those who are fanning these rumours to desist in the interest of this country”.

On the issue of a president of Igbo descent, Enwo-Igariwey said it is currently not on the agenda of Ohanaeze, however, he added that the decision of the group would be made known at the appropriate time.

According to him, there was no time the group said they haven’t pushed the idea of an Igbo man being President in 2015.

“We are not looking at Igbo Presidency in 2015. Our decisions would be made known at the appropriate time. There was no time we said we haven’t pushed the idea of an Igbo man being President in 2015”, Enwo-Igariwey said.

On the forthcoming general elections, the Ohanaeze president called on all Igbos to be registered for voting in their places of residence.

This, he noted, is a civic responsibility, adding that by so doing, Igbos all over the nation should be able to contribute to decisions in their areas of residence.