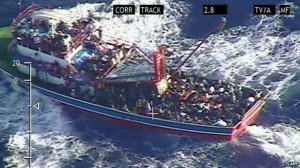 A thorough search and rescue operation is currently under way in Cyprus for approximately 300 people who are stranded at sea and are suspected to be refugees from Syria.

Authorities in Cyprus say they received a distress signal in the early hours of Thursday from a small vessel sailing about 50 nautical miles (92km) south-west of the town of Paphos, on Cyprus’s western coast.

“We estimate about 300 people are on board the boat, most of them women and children,” a spokeswoman told Reuters. “They are on a small fishing boat and are possibly refugees from Syria.”

Photos taken from a Cypriot army helicopter showed dozens of people sitting on the main deck of what appeared to be a commercial trawler. Weather conditions in the area were bad.

The condition of the boat’s occupants was not immediately known. Cypriot authorities were making arrangements to receive and provide medical treatment to the migrants, the defence ministry said.

State radio said that, as well as coastguards, a cruise boat was sailing to the scene to offer assistance and a tanker was also on site.