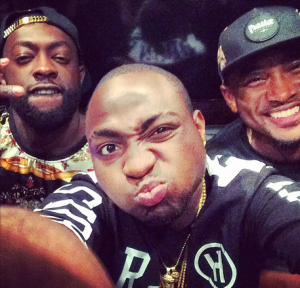 After the Skelewu video was released, there was a little conflict between Davido and Sesan Ogunro; Davido blamed him for the poor video production and all of that.

Sesan, who had had earlier been contracted to make a video for Davido’s hit song, ‘Skelewu’ fell out with the self-styled Omo Baba Olowo when Davido rejected the video that was made for the song and things even got worse when the video got leaked online.

Since then, both parties have had to go their separate ways as Davido had to contract Sesan’s protégé, ‘Moe Musa’ to make the video for the song eventually.

However, things seems to have changed between the pair as we can reveal that Davido touched down in New York City last night after a successful concert in Berlin, Germany and today he has just shared a selfie with himself and Sesan with the caption, ‘Yo last night was a movie fam!!!!!!! @sesandirector …. Patron never again!!?’.

Not long after Davido shared a selfie of himself with Sesan lounging and partying in New York City, Sesan Ogunro has also confirmed via a series of tweets that he’ll be shooting two new videos for Davido in New York this week.