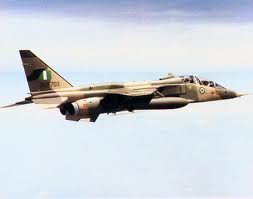 The Defence Headquarters said on Sunday that a Nigerian Air Force Alpha jet is currently missing in Adamawa.

The Director of Defence Information, Maj-Gen. Chris Olukolade, who ‎stated this in an e-mail, said the aircraft had been missing since Friday.

According to the defence spokesman, the aircraft left Yola at 10.45am on Friday on a routine operational mission and was expected to return to base by 12.00 noon same day but has not been found since then.

He disclosed that there were two pilots aboard the aircraft.

“The aircraft, with two pilots on board, left Yola at about 10:45am on September 12, 2014 on a routine operational mission and was expected back by 12:00 noon on same day.

“Since then all efforts to establish contact with the aircraft have not yielded any positive result.

“Meanwhile, search and rescue effort is ongoing to establish contact with the crew”.