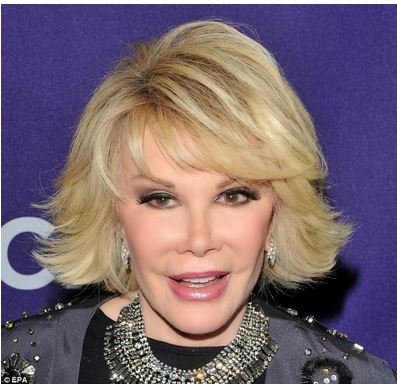 According to Daily Mail, doctors at Mount Sinai Hospital in New York City, yesterday Sunday August 31st started the process of bringing her out of her medically-induced coma, but fear she could be left as ‘a vegetable’ or ‘needing a wheelchair’ as they battle to save her life. The waking-up process will take until tomorrow Tuesday September 2nd.

“There is real concern that the part of the brain that controls motor skills may have been compromised leaving her as either a vegetable or in a wheelchair,’ a source close to the family said

“Rivers would not want to live unless she could enjoy ‘a full and active life. … (She) would never want to be a burden on anyone’ another family friend said

The 81-year-old was having surgery on her vocal cords at a clinic in NYC when she suddenly stopped breathing during the procedure on Thursday August 28th.