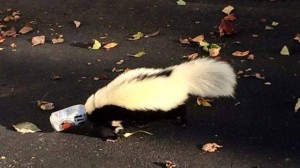 A skunk found with a beer can stuck on its head outside a fraternity house in Ohio has been rescued.

Police in Oxford responded to the unusual call to find the mammal blindly banging into shrubs outside the house.

A picture posted on the Oxford Police Facebook page showed the skunk with a Miller Lite can stuck on its head.

“First call of the day on 9/14/2014 involved this little fella staggering all over the area near the Beta House,” the post read.

An animal control officer was able to free the skunk without getting sprayed, Sergeant Jon Varley said.

“One of our public safety assistants (animal control officer) was able to remove the can without being ‘skunked’,” Oxford police wrote on Facebook.

The skunk was then released.

Oxford is home to Miami University, about 35 miles northwest of Cincinnati.