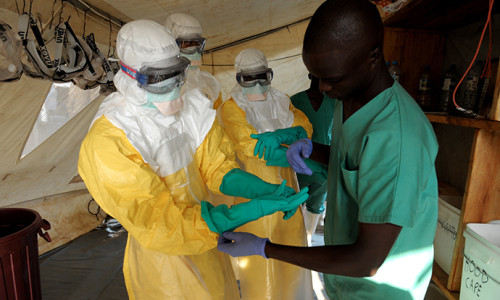 The United States Government on Thursday commended the Federal Government’s response to the outbreak of Ebola virus disease (EVD), even as it called for Nigeria’s assistance to other three most EVD-endemic countries of Guinea, Sierra Leone and Liberia.

The Assistant Secretary of State for African Affairs, Ambassador Linda Thomas Greenfield, disclosed this during a courtesy call on the Minister of Health, Prof Onyebuchi Chukwu.

She said: “I commend the minister and his staff and the government of Nigeria on how effectively they have been working to deal with the Ebola outbreak here in Nigeria.

“They are taking all the right steps to control this and they are having great success here. I appealed to the minister to assist neighbouring Liberia, Sierra Leone as they also grapple with this terrible outbreak”.

Greenfield noted that even with the inability of the US to provide Nigeria with ZMapp, the experimental drug developed to manage the virus disease, collaboration between both countries had been effective in controlling the Ebola outbreak.

She said: “I think the Centre for Disease Control has proactively supported all the countries in the West African region in dealing with the situation. It is not about Zmapp. There were six doses of Zmapp available; they were all used.

“What is important is how to control the spread of the disease. And, that is exactly what is being done here in Nigeria; and efforts are being made to have the same kind of success in Liberia”.

On the failure of the US government to assist Nigeria with Zmapp drugs despite appeals for it, Greenfield said: “What is important is how to control the spread of the disease. And that is exactly what is being done here in Nigeria; and efforts are being made to have the same kind of success in Liberia”.

On global efforts to find a cure for the infectious Ebola virus, the US under-secretary of state said, “I think the world is doing everything it possibly can to control this disease. There are many diseases in the world. I mentioned to the minister that we are still wary about malaria.

“There are more people dying of malaria in Africa than those that are dying of Ebola. We are working on all of these to try to find a way of controlling them. It is not as a result of neglect; it is a result of hard work to continue to control the spread”.

In his response, Chukwu expressed appreciation to the US and other development partners for assisting Nigeria manage the outbreak. He said Nigeria is willing to assist the countries affected by the disease.

“You talked about Zmapp; the explanation has come why that was impossible. But we’ve also done well without Zmapp. Eight patients have been successfully managed and discharged. The point is that it is not all about Zmapp. So, we are going to assist other ECOWAS countries”, the health minister said.