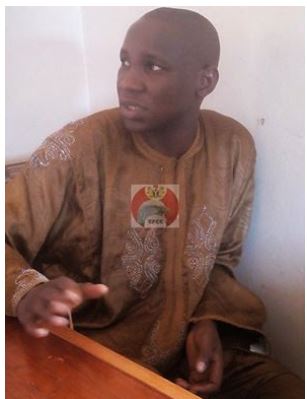 Below is the EFCC press release

The Economic and Financial Crimes Commission on September 22, 2014 arraigned one Musa Yunusa alias Yassa Mustapha Aliyu before Justice Darius Khobo of the Kaduna State High Court on one count charge of obtaining money by false pretense. The accused allegedly obtained the sum of N100, 000 (One Hundred Thousand Naira Only) from one Abdulkadir Abbas under the guise that he had power voltage regulators to sell to him.

The charge reads, “that you Musa Yunusa a.k.a Yassa Mustapha Aliyu sometime in March 2012 in Kaduna, within the jurisdiction of the High Court of Kaduna State with intent to defraud obtained the sum of N100,000 (One Hundred Thousand Naira only) from one Abdulkadir Abbas by falsely representing that you have a power voltage regulator (PVR) and capable of securing and delivering same to him which pretence you knew to be false and thereby committed an offence contrary to section 1 (1)(a) of the Advance Fee Fraud and Other Fraud Related Offences Act 2006 and punishable under section 1(3) of the same Act”.
The accused pleaded not guilty when the charge was read to him.

The accused was remanded in prison custody while the case was adjourned to October 9, 2014 for consideration of bail application