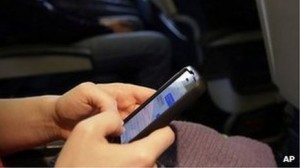 In what might result to confusion, The European Aviation Safety Agency (EASA) says electronic devices such as mobile phones can be left switched on during plane flights. EASA says that electronic devices do not pose a safety risk.

The announcement clears the way for airlines to permit the use of mobile phones, once they have conducted their own safety reviews.

Currently airline passengers have to switch devices to flight mode and make calls from the airport terminal.

The EASA sets the framework for airlines making safety decisions.

The agency said each airline would still have to go through an assessment process, ensuring aircraft systems are not affected by the signals from portable electronic devices before establishing their own rules for their operation.

As a result there could be a delay in implementing the new rules at some airlines. It also says that airlines may opt for different policies on the use of mobile devices.

This move strips away the last regulatory hurdle stopping airline passengers in Europe from making phone calls or using wi-fi on any flight, even while taxiing.

Secondly, the airlines will need to pay to kit out their planes so that phones and wi-fi work. And thirdly, there’s the passengers.

British Airways, for example, already has a business-class-only flight from London to New York that lets passengers use wi-fi and send texts.

But they block voice-calls, because whenever they survey passengers, most frown at the idea of everyone around them talking on the phone during a flight.

Airliners remain one of the last places work can’t get hold of you on the phone.