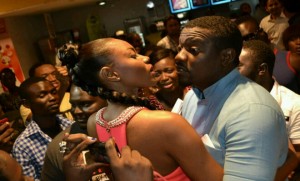 Lovers of Ghanaian super star actress, Yvonne Nelson, have urged her to, as a matter of urgency, get hooked to her long time friend and colleague, John Dumelo, instead of the constant dalliance and rumours that keep flying about their friendship.

According to a survey conducted by an authoritative Ghanaian entertainment website, her fans believe that the duo should actually get married rather keep on fooling themselves that they are ‘friends while they keep doing things that ordinary friends should not do.’

According to the respondents of the survey, Yvonne Nelson and John Dumelo are actually dating, though they keep denying that there is nothing going on between them.

Hear what some of the respondents said:

“Yvonne Nelson and John Dumelo should stop deceiving themselves and get married. We all know they are dating but they keep denying the fact but what they do behind the scene is quite obvious. So what are they hiding?”

“Those who know the two closely can attest to the fact that they are dating and sleeping together, so what is the point of them hiding it from the public? They are both adults and they should do the right thing instead of deceiving themselves.”

“I am a movie person and I have been on set where I have seen Yvonne and John do things only lovers do, so I get surprised when they keep telling people they are mere friends. They are more than that ans should do the right thing and get married because they are of age and no one can tell them what to do.”

Do you think these two would make a good couple?