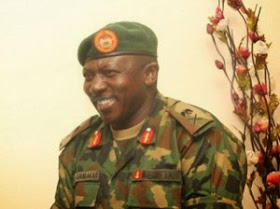 The Nigerian Defence Headquarters has debunked reports in a section of the media that the former General Officer Commanding, 7 Division, Nigerian Army, Maiduguri, Maj. Gen. Abubakar Mohammed, has been retired.

Earlier today, it was reported that the GOC, who was the target of a soldiers revolt at Maimalari Barracks in Borno State last May, before he was ‘quietly retired’.

The report quoted a top military source in Abuja as saying that Gen. Mohammed was recalled to the Army Headquarters without posting for months following the soldiers’ unsuccessful attempt on his life before he was finally retired last month.

Twelve of the soldiers, who were found guilty of mutiny, disobedience and attempted murder among other charges, were early hours of Tuesday sentenced to death by a military court.
The defence headquarters debunked the report via its Twitter handle @DefenceInfoNG.