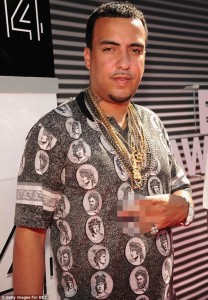 The 29-year-old rapper has separated from the ‘Keeping Up With The Kardashians’ star after eight months together.

In a chat with PEOPLE Magazine, he said: – ‘I’m feeling great. Feeling great and looking even better.’

Meanwhile, the music artist has revealed he still has a few problems that need sorting out, he explained: ‘[I am] working on movies and my album and making sure all my artists are straight. And definitely try to get rid of all these problems I got.’

When asked what the problems were, he added: ‘Baby mama drama and all kind of different [stuff].’

Recently, Khloé appeared to address her split from French by posting a series of cryptic tweets. She wrote: ‘Some cause happiness wherever they go; others whenever they go.’

The reality star then posted an inspirational quote on Twitter, which appeared to be related to her romance. She tweeted: ‘’Be grateful for what you have and stop complaining – it bores everybody else, does you no good, and doesn’t solve any problems.’ Amen (sic)’…