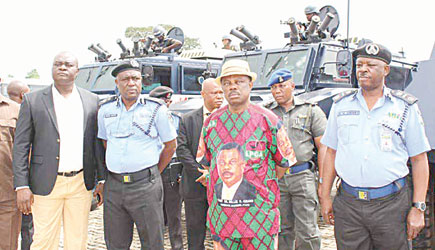 In his speech at the occasion, Mr. Obiano said the target of his administration was to refurbish and present 20 APCs to the state police command for deployment to various parts of the state.

He said that two more APCs would be handed over to the police in two weeks.

He promised that his administration would present 10 horses to the police to aid crowd control during major events.

“The APCs are expected to equip the police to adequately battle kidnappers, armed robbers and criminals who threaten the peace in the state”, he said.

The governor urged the police to make effective use and maintain the APCs to protect the people of the state.

In his remark, the out-going Commissioner of Police in the state, Usman Gwari, thanked the governor for his zeal and commitment to the maintenance of peace and security in the state.

Mr. Gwari, who was recently promoted to the rank of Assistant Inspector-General of Police, AIG, recalled that the APCs were wasting away until the governor refurbished them for effective performance.

He assured that vehicles would be effectively used for crime fighting.

Mr. Gwari attributed the achievements recorded by the state police command during his tenure to the good working relations between the police and the government.

Mr. Victor Okoye, Chairman, House of Assembly Committee on Security, commended the governor for equipping the police and building their capacity to discharge their duties effectively.