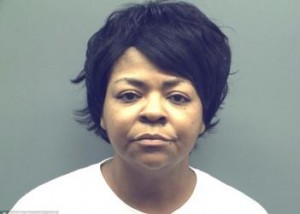 A grandmother from East Texas was so frantic to see a movie she disregarded her babysitting duties and left her 5-month-old grandchild locked in her hot car while she enjoyed the movie.

The grandmother’s name is Felicia Green and she is 49-years-old and is being held on child endangerment charges after police say they responded to a 911 phone call Wednesday night at Carmike Cinemas about an infant locked inside a hot car in the parking lot, reports Daily Mail. The investigators were able to determine that the infant had been left alone for over an hour.

The infant was rescued from the car and according to authorities she is reportedly in good health. The car was very heated, but the temperature went down to the mid-70s when the officers got the baby out the car.

The employees at Carmike Cinemas helped authorities find Felicia Green, according to KFDM News. Felicia Green is being held on $5,000 bond and the baby is thankfully in the care of another family member.

Felicia Green told the authorities she was watching her grandchild because the child’s mother was at work. The grandmother says the infant was already sleeping in the car when she went inside to watch the movie, reports Tyler Morning Telegraph.