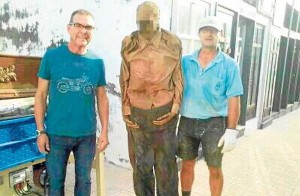 Talk about a grave situation.

A gravedigger in Spain was suspended after a photo of him posing with an exhumed body circulated on social medial.

The man, who was identified only as Clemente, is being investigated by police after appearing in the photo with a man who is believed to be the dead man’s nephew. The victim reportedly died 23 years ago. The body was exhumed so the grave could be extended, according to UPI.

Clemente is on the right. The photo was taken by the dead man’s niece.

“It was silliness with no justification whatsoever,” a municipal representative said in a statement.