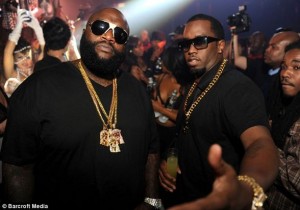 It seems like we are about to witness a mega lawsuit against the biggest name in American Hip-Hop music.

French Montana has been teasing fans about a track titled “Gucci Mane”, which is slated to be his next single, as he recently told MTV News.

The record has an all-star cast, both Rick Ross and Lil Wayne are featured on it while Kanye West helped produce it.

However, a record label is attempting to stop the single’s release as they claim it was stolen.

Chinga Chang Records is behind the accusations, which states that the song “Gucci Mane” belongs to their artist 9gotti; claiming that Kanye and others stole it from them.

Chinga Chang Records sent a cease & desist letter which states that the rip off may have been a “drunken oversight”, and goes on to throw shots at Diddy and Rick Ross.

According to the suit, 9gotti’s song and French’s are identical.

They are attempting to stop French’s version from seeing the light of day; It’s unclear why French Montana wasn’t listed in the lawsuit.