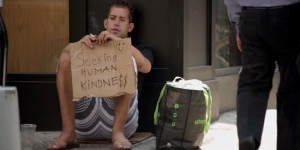 Joe is a crafty young homeless man in New York who hooks up with a different woman each night just to avoid sleeping out in the cold. The 26-year-old serial charmer has managed to lure hundreds of women into inviting him to spend the night with them. Originally from Boston, Joe says that he loves New York because it has 8 million people, and he can be with a different girl whenever he wants.

“Dude I’ll go up to any random girl and tell them I love them, I wanna marry ‘em – just for recreational purposes,” he bragged. Joe isn’t exactly the definition of handsome, but his confidence and arrogance seem to be serving him quite well. And his homeless status doesn’t really stop him from trying to look good.

“I wake up with money in my pocket – my responsibility is to not look homeless, I go to the shop to gel my hair, grab a Red Bull and walk out,” he said. He uses the money that he earns by begging (up to $150 a day) on his appearance, aiming to attract as many women as possible. He also tries to get his hands on as many freebies as possible, like hairgel and deodorant samples. Although he owns only four different outfits, he manages to keep them quite clean.

Joe claims that he spends at least three to four nights a week with one of his innumerable lady friends – he often enjoys drinks and fancy dinners at their expense. Of course, there are times when he has no one to keep him company, but that doesn’t seem to bother him a lot.

“I might sleep on cardboard like two or three nights a week but I literally wake up every single day and do whatever I want,” he said. “It will be like 7 o’clock in the morning, girls wake me up and say ‘you’re passed out on the sidewalk – you need to go home’. I say I am home!”

Joe, who has drug problems and drinks copious amounts of alcohol every day, said that he became homeless after his mother found his drug stash and kicked him out of the house. He says he doesn’t regret it, but he doesn’t want anyone to follow his lifestyle, either.

“Never become like me… ever,” he insisted. “This abstract lifestyle is not for everybody. I’m pretty sure if you look at all the homeless people in New York City, I’m the only one that can really pull this sh*t off.”

Share
Facebook
Twitter
WhatsApp
Previous articleMan Starts Every Day by Voluntarily Falling Down Flight of Concrete Stairs as a Form of Massage
Next article7 Smart Tricks for Married Men to Survive their Shopaholic Wives
- Advertisement -Ad ==> Discover how a young Nigerian graduate now makes a consistent 40k per week doing a legitimate online business. You too can start yours now, click here!!!