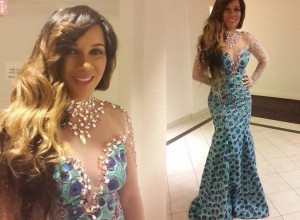 Ibinabo became the first ever female president of the Actors Guild of Nigeria (AGN) and a fab mother of 5.

In a chat with City People’s Vivian Onuorah, the pretty actress talks about her fiance, how both their children played a role in the proposal, what she does to maintain her looks and more.

City People: What’s is the secret of your glow?
Ibinabo: Wow. I know am blossoming but that is what happens when you are in love. I have found my soulmate, my friend, my brother and that’s why am glowing.

How did you feel when you discovered you have fallen in love?
Well it’s not that I suddenly found that love, the love has been there and we have been best of friends since our school days at University of Ibadan and when we met again years after, we remained best of friends. His kids and mine have always been wondering how the both of us can be this close, almost like brother and sister. I think the kids planned it, they were like why don’t you two just get married and we started thinking and after, a while, we felt this is God telling us its time and that’s it.

So what was your reaction when he asked you to marry him?
I knew it was God’s willing because I just said yes without thinking about it. Everything was just perfect, perfect time also.

How did he propose to you?
(Laughs) He is an Igbo man oh. I think the kids planned it more than we did, that’s how it is because the day he asked me, my kids were calling, his kids were calling and the kids are all abroad while we were in Nigeria. So everybody was eager to know my reply. Kids were like Daddy have you asked her, mine were also calling to say mummy hope you said yes (laughs). It was a beautiful moment and everybody was happy.

What do you admire about him?
He looks after a woman very well, he adores me and he is a family oriented person. He loves his family, he loves us totally and he is very committed to his work. He encourages me a lot in what I do and we pray a lot.We have the fear of God which is paramount in our relationship. I think we are heading the right direction and of course with my kind of lifestyle and the kind of work I do, every man will withdraw but no, he is always there, giving me the strength, support and ideas to better what am doing. So I really do admire him.

What are your marriage plans and have you done any one secretly yet?
No, the press just heard we got engaged but we are getting married in December, the actual date hasn’t been fixed yet but it’s specifically in December. Everything is in progress by the Grace of God.

What about his physical attributes, how handsome is he?
Oh My God, trust me and my taste. He is just a very fantastic guy and he looks good.

Would you say that’s why you fell in love with him?
Yes and apart from the fact that we were best of friends before marriage came, he is still who he is.

At over 40, you still look like a teenager. How do you stay this fit, young and pretty?
It’s amazing I don’t know but I love to look good though and dress well and not because it’s too expensive. If it’s expensive I won’t wear it because you know I pay children’s school fees (laughs) but if it looks very good on me, I won’t really mind .But I love to look decent and smart all the time. And about my looks, I don’t really know because I don’t exercise nor do anything to keep fit. I don’t even go to gym. I think I got this stature from my grandmother because they are quite petite