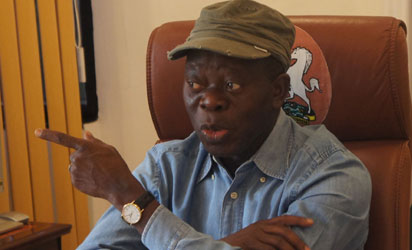 Governor Adams Oshiomhole of Edo State has said the All Progressives Congress will not miss Chief Tom Ikimi, who recently dumped the party for the People Democratic Party.

The governor, who spoke in Benin City on Tuesday through his adviser on political matters, Charles Idahosa, said Ikimi’s membership of the APC had been a liability for him.

His words: “What Ikimi has done now, by saying that he has gone back to PDP where his Esan brother Anenih is, just because Chief John Odigie Oyegun, the first Benin man was made national chairman of APC is an insult to the Benins and they will pay for it come February 2015, because when both of them were national chairmen of NRC and SDP respectively, the Benins supported them”.

He continued: “How can you tell people that you are decamping because you were not made national chairman? That Oyegun was imposed? Meanwhile, Ikimi is the godfather of imposition”.

Expressing happiness that “Ikimi now knows how it feels to impose people”, Idahosa pointed out that “The governor is so protective of him. But he does not know the implication of what he did”.

According to Oshiomhole, if Ikimi had won, Oyegun would not have left. “Oyegun rose through the system to become a Federal Permanent Secretary and the first elected Executive Governor of Edo state. How he feels that he is more superior or better than Oyegun I don’t know”.