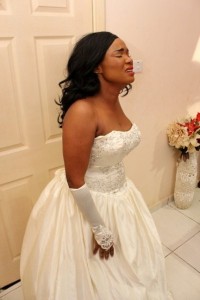 Today’s amebo seems to be all about women from the music scene or Nollywood.

Now, it’s about Nollywood actress Iyabo Ojo. Iyabo Ojo claims that she was ill prepared for her first marriage, which explains why it crashed a few years afterwards.

In an interview with Tribune Newspapers recently, the mother of two said the marriage collapsed because of irreconcilable differences: –

‘I rushed into that marriage and I rushed out. Then, I was not even deeply involved in acting like now. One thing I have learnt is that the older you get, the calmer you become and the more you reason deeply before you take action. My first marriage was very fast. I dated him for about six months and we got married. It was two different people under one roof; we didn’t really understand ourselves. I didn’t understand my ex’s way of life and I was not even ready to accept his way of life.’ She continued, ‘I came from a family where when you go to work in the morning, you come back in the evening to stay with your family. He came from a world where he could go for one week and when he’s back, he’s back. So, that didn’t really work and that was the genesis of our problem. So, I said to myself that this was not what I wanted; I wanted more out of life and so I moved on’ Asked if she could have been calmer and strived to make it work, she said, ‘I have found out that you cannot find the perfect thing in one man but there is one thing I have found in this relationship that I am into right now, and that is peace of mind. When you are experiencing peace of mind in your home, you will see that everything will fall in line. You don’t allow your stardom to get in the way of your happiness. People usually tell me that I don’t behave like a celebrity and I tell them may be I don’t see myself as one.’

Now remarried, Iyabo Ojo is an actress and movie producer. Two of her movies, Beyond Disability and Silence, will be released later this year.