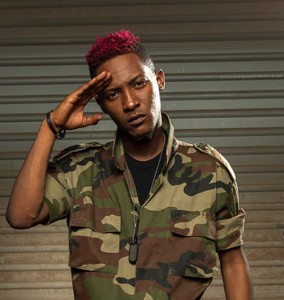 This report hasn’t been confirmed yet but the reporters at City People magazine say that music star, Jesse Abaga aka Jesse Jagz is currently dating Femi Kuti’s dancer known as called Sandra.

Jesse, a father of a 10-year old girl (Jade), who was few months back rumored to be having an affair with a female rapper, singer and song writer, Tesh Delilah Carter is currently dating pretty Sandra and they are really exclusive, although no one can say specifically if the relationship would leads to anywhere.

The alleged couple met early this year, and the relationship which started on a platonic level but later evolved into a hot affair as Sandra is madly in love with Jesse so much that she frequents his (Jesse Jagz) Gbagada, Lagos home. Beyond that, she’s always using his pictures as her Blackberry Display Picture (DP).

Jesse Jagz is one of the highly talented recording artistes in Nigeria who is described as Nigeria’s Kanye West because of his flirtatious experimentation with different genres of music from R&B to roots, reggae and pop, all built on a predominantly hip hop foundation.

Jesse started his music career in Jos with his elder brother, Jude Abaga a.k.a M.I before relocating to Lagos to sign a record deal with Chocolate City alongside his brother and Ice Prince Zamani.

However, he later left the label to set up his own label called Jagz Nation. Sandra is one of the hottest dancers around today; as one of Femi Kuti’s official dancers, she also features in musical videos and danced in the video of popular song, ‘Sekem’ by M.C Galaxy….