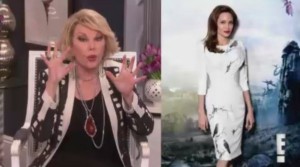 According to reports reaching me, the ‘Fashion Police’ anchor — Joan Rivers might be out of her coma soon.

Doctors say that she is greatly improving and they have begun taking the comedian out of a medically induced coma, but fear she could be left with permanent brain damage or in a wheelchair.

Her daughter Melissa said on Sunday the actress’s family are “keeping our fingers crossed,” as they slowly wake her up – a process which will take until Tuesday.

‘There is real concern that the part of the brain that controls motor skills may have been compromised leaving her as either a vegetable or in a wheelchair,’ a source close to the family told the New York Daily News.

The 81 year old comedian has been in hospital since Thursday, when she suffered cardiac arrest after her breathing stopped during a vocal cord procedure at a Manhattan clinic. My fingers are crossed here too. So sad.