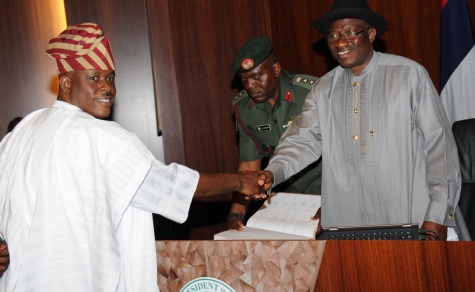 The All Progressives Congress, Lagos State chapter, has alleged that the reason President Goodluck Jonathan appointed Senator Musiliu Obanikoro as the Minister of State for Defence was to destroy the APC, especially in the South-West.

According to the party, Obanikoro was already doing his “master’s bidding”, as he had used soldiers and thugs to intimidate members of the APC both in the Ekiti and Osun governorship elections.

The Lagos APC Publicity Secretary, Mr. Joe Igbokwe, said this during a press conference on Thursday to address the murder of an APC member, Alhaji Azeez Asake, who was killed shortly after the Peoples Democratic Party held a rally at Tafawa Balewa Square in Lagos on Saturday.

Igbokwe, who fingered Obanikoro in the murder, said one of the culprits identified only as Abija, had been arrested by the police.

He said, “Last Saturday, after the PDP held its zonal rally at the TBS, Alhaji Asake was killed on Lagos Island by a group loyal to Senator Obanikoro, a junior minister in the Ministry of Defence. One man known as Abija, who leads the group, ordered one Olokodana to shoot Asake dead. He has been arrested by the police while Olokodana is on the run.

“We want to thank the Commissioner of Police, Mr. Kayode Aderanti for the great job. On Asake’s murder, we want to state that Obanikoro is a violent politician who uses every means possible to achieve the desires of his heart irrespective of the feeling of others”.

Igbokwe said it was unfortunate that the minister, having failed to win the governorship election in 2007, was perpetrating acts of violence against the people of Lagos.

He called Obanikoro’s attention to the fact that he is a minister of the Federal Republic of Nigeria and not of the PDP.

He said, “People only hear about Obanikoro, a junior minister and we hear nothing about the Minister of Defence (Aliyu Gusau). This is because Obanikoro’s job is just to use security agents to destroy the opposition and that was what he did at Ilubirin Estate the other day.

“This must be an embarrassment to the Ministry of Defence. The ministry works to defend every Nigerian whether he belongs to the APC or the PDP; irrespective of his tribe or religion. To use that exalted ministry to advance the cause of the ruling party is a threat to national unity”.

However, Obanikoro had on Monday, through his media aide, Ohimai Amaize, denied having a hand in Asake’s murder and accused the APC of making unfounded allegations.