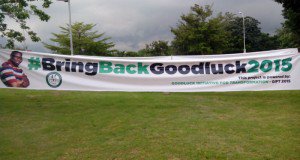 Barely 48 hours after a Washington Post article questioned the glaring abuse of the #BringBackOurGirls campaign by supporters of President Goodluck Jonathan’s re-election bid, the president has directed that the #BringBackGoodluck2015 signs and banners around the nation’s capital, be brought down immediately.

A statement issued on Wednesday by his special adviser on media publicity, Reuben Abati, said the president, just like many Nigerians, found the banners offensive and repugnant

The statement reads in part: “President Jonathan wholly shares the widely expressed view that the signs which were put up without his knowledge or approval are a highly insensitive parody of the #BringBackOurGirls hash tag.

“While President Jonathan appreciates the enthusiastic show of support for his administration by a broad range of stakeholders, he condemns the #Bring Back Jonathan 2015 signs which appear to make light of the very serious national and global concern for the abducted Chibok girls”.

While assuring all Nigerians and the international community that his administration remains fully engaged with efforts to rescue the abducted girls, President Jonathan maintained that he will not knowingly promote any action that will fly in the face of the seriousness of the plight of the abducted girls and the anguish of their families.