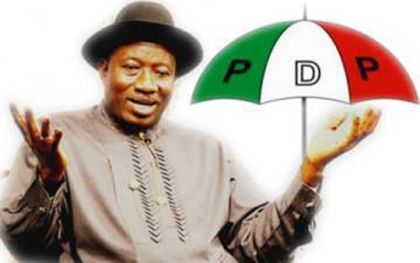 President Goodluck Jonathan has been advised to reject his recent endorsement by the Peoples Democratic Party’s National Executive Committee (NEC) as the party’s sole Presidential candidate for the 2015 elections as it may backfire on him.

The call is contained in a statement jointly signed by leaders of a coalition of pro-democracy groups under the aegis of National Coalition Against Fraudulent Politicians, who also said that the open letter written to President Jonathan by an Adamawa State PDP governorship aspirant, Dr. Umar Ardo and others calling on the president to shelve his 2015 presidential ambition should be heeded.

“Firstly, it is pertinent to note that any student of Law will be accustomed to some of the relevant clauses and cases cited by Dr. Ardo in his submission. However, it is also important for Nigerians who are not vast in Law or constitutionality to have a clear understanding of the message Dr. Umar Ardo sent to the public domain. Either Dr. Ardo is right or wrong in his submissions is left for constitutional lawyers to proof in a Court of Law.

“Our opinion on the matter is based on the moral rights of President Jonathan who has continued to take Nigerians for a ride in his attempt to stage manage a third term bid through the back door. We applaud the courage of Dr. Umar Ardo who has headed for the court of Appeal for interpretation in the constitutional provision for an occupant of the executive office to stay beyond eight years. Dr. Ardo’s gallant effort to approach the court of Appeal at his own expense to buttress his views about the ineligibility of President Jonathan to contest the 2015 election is commendable”, the group said.

While saying that it was not unaware of the political game plan by some politicians hiding under the cloak of regional representation to extend the tenure of office of President Jonathan in an attempt to make him the longest serving President Nigeria ever had, it added that the ‘third term’ agenda of the president is not a secret as his leaders and advisers from the south-south have continued to beat war drums if he does not succeed.

“However, we are sure that this is just an effort in futility. The insecurity of our people in the North Eastern part of Nigeria where civilians are killed and maimed on a daily basis attested to his inability to stay a day more in office after May 29th, 2015. Ardo has unveiled to discerning hearts a good example from one of the worlds’ longest democracy, the USA from where we copied our brand of democracy. For example, out of the nine past Vice Presidents in US who for one reason or another took over the rein of leadership from their principals never went beyond the provisional eight years of two terms in office? Some of them sacrificed their personal ambitions to resist the political temptations to contest an election”, it said.

The group noted that instead of President Jonathan to be magnanimous enough to retire from active politics in 2015 and leave the political arena for other Nigerians who have not benefited from the country as much as he has, he has continued to heat up the polity while his foot soldiers are busy campaigning all over the country without any care for electoral rules and regulations.