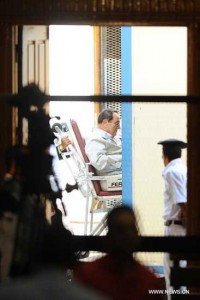 There are always a group of people that would support a person, no matter how bad the individual might appear to be.

Large number of supporters and opponents of Hosni Mubarak have been started a great protest outside a Cairo court, where the former Egyptian president is being tried. The main reason behind the riots is after the verdict was postponed yet again – this time, till November.

The former president Mubarak is accused of ordering the killing of protesters in the 2011 uprising that led to the end of his rule.

It was meant to be the end to a long saga. But the postponement came as an unpleasant surprise for Mubarak’s supporters.

“The judge is hesitating, it’s a tough decision and he’s obviously not that strong. How come he sets a date for verdict and postpones?” Mubarak supporter Pusy Mohamed said.

“We are not against the judge’s decision, but Mubarak is 86 years old, when they first said the verdict is in 40 days, we thought he might not make it. Now it’s two more months,” Mubarak supporter Azza Abdallah said.

And then the families of victims who had hoped for justice.

“They are playing with us, and taking us lightly. They are disrespecting all of us. He is giving Mubarak an indirect innocence. If this boy was the son of a judge would his verdict be delayed. Will his father wait four years in trials? of course not,” Victim’s father Khalifa Ahmed said.

So anger on both sides.But the judge says he wants to release the trial documents on the same day as the verdict -and it isn’t ready yet. There are some doubts, though, in legal circles.

“He has the right to delay, and the judges must not haste a verdict. But I know the case and I don’t think that the 160 thousand papers the judge referred to is an accurate number for the trials documents,” Civil rights lawyer Othman Hefny said.

Usually a court verdict would disappoint only one of two opponents. but with the delay the judge made both Mubarak’s supporters and the victims’ families are furious. After waiting three years to know Mubarak’s fate, two more months is pushing their patience beyond the limit.