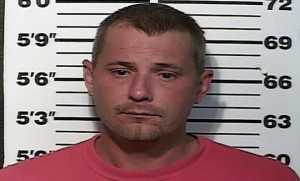 A father of Tennessee, was arrested after forcing his son to drink a lot of alcohol.

Sweetwater Police said that the father forced his 15-year-old son to drink alcohol as a punishment until he passed out.

35-year-old Mark Allen Hughes, caught his son drinking alcohol and decided to teach him a lesson on the dangers of consuming alcohol.

Police were called to the home of the teenager on Saturday night by witnesses, who said that Hughes forced his son to play a drinking game. The boy was forced to drink many cups of alcohol.

Witnesses told police that people who tried to stop Hughes from forcing his son to keep drinking the alcoholic beverages, were attacked by the father.

When officers arrived at the home of the boy, he had no pulse and they performed CPR until an ambulance arrived. The teen was treated at a hospital and released.

Sweetwater Police Chief Eddie Byrum said that the case will be prosecuted to the fullest extent of the law.

Hughes, who was drunk at the time, was charged with aggravated child abuse, neglect and contributing to the delinquency of a minor.