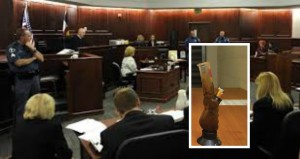 Most people fronting court on criminal charges sit quietly and do their best to convince the judge they’re honest citizens who’ve been punished enough by all the stresses of the court process.

Then there’s Adam Hanly. He pulled out a glass bong and took a hit of weed right as the judge was hearing his case in the Taree court.

Hanly finished up by telling police he was “a servant of the lord Rastafari and had been sent by the Lord Jesus Christ to smoke up this court.”

Needless to say, the pot smoker was charged again. Hanly, a 50-year-old who listed his occupation as “avocado grower” was already facing a drug possession charge before he whipped out the bong.

Police have charged Hanly with attempting to administer a prohibited drug as well as possession.