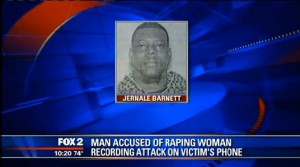 A very violent, disturbing rape was caught on tape, which sent a 24-year-old pregnant woman into early labor. According to police and My Fox Detroit, the man who raped his ex-pregnant girlfriend is now in jail.

My Fox Detroit says Jernale Barnett was arrested for not only raping the pregnant mother of a two-year-old, but also recording the entire rape on the victim’s cell phone. After screams were heard coming from the home, My Fox Detroit said, “A teenager who lives nearby ran across the street and found the man raping his aunt.”

It was later revealed by Fox the suspect was in fact the victim’s ex-boyfriend who, “came over to her house drunk, dragged her upstairs, hit her several times, and then raped her in front of her 2-year-old.”

The rape was so tough and violent, according to recent reports, it sent the woman who was eight months pregnant into early labor.

According to recent reports, the woman successfully gave birth to her newborn, who is healthy, but the woman is mentally scarred because of her two-year-old witnessing the entire rape.

Authorities arrested Jernale Barnett at his job due to the fact the cell phone with the rape saved on it, according to My Fox Detroit, was handed over to police.