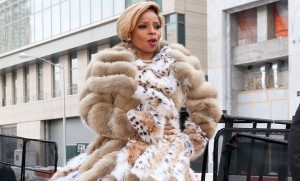 Last fall, UK dance duo Disclosure released a brand new version of their track ‘F For You’ that featured none other than Mary J. Blige.

The R&B singer had recently taken the stage alongside the group at a show in NYC, and now it seems like their musical partnership will continue on. In a new interview with The Guardian, Blige announced that her new album, Mary J. Blige: The London Sessions, will be arriving in November, and features work by Disclosure and their “Latch” collaborator Sam Smith.

Slated to include ten tracks, some co-written by Smith and Disclosure, Blige says of the album:

“Our idea was to become part of London, to really embrace the culture – to really live in it. Not that I haven’t been here before, but I’ve never had the chance to really soak in it the way I have this time… The music is free over here the way it used to be in the States. Artists are just free to do what they love. Listening to the radio you can hear the freedom. The music is living and breathing – you can hear that from Adele’s last album. It was massive – a big deal. But she did what she loved.”

On the subject of her collaborators, she added, “Working with these guys, it’s like they’re my family. We all seem to have a good chemistry together. And when I sign on, I sign on – I can’t go hang out! Because I have to make sure that my music is right. And I love to work. I love creating, and once I’m in it, I’m just in it. I just love being all in the midst of the creativity.”