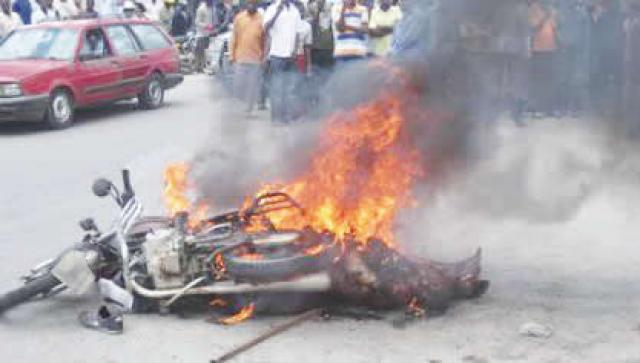 The State Police Public Relations Officer, Ismaila Numan, confirmed the incident to the News Agency of Nigeria in Nasarawa.

Numan said the mob set the suspects ablaze after being caught allegedly trying to snatch an Okada in the area.

He said the policemen from the nearest divisional command, raced to the area after receiving a distress call.

“But before our men got to the scene of the incident, the two suspects were already set ablaze by the mob while the third suspect ran away”, he said.

Numan explained that before police could get to the scene, one of the two suspects set ablaze died while “our men were able to rescue the second one alive”.

He however said the rescued suspect died while he was being taken to the hospital.

Numan said the command had commenced investigation into the matter with a warning to members of the public to desist from taking the laws into their hands.