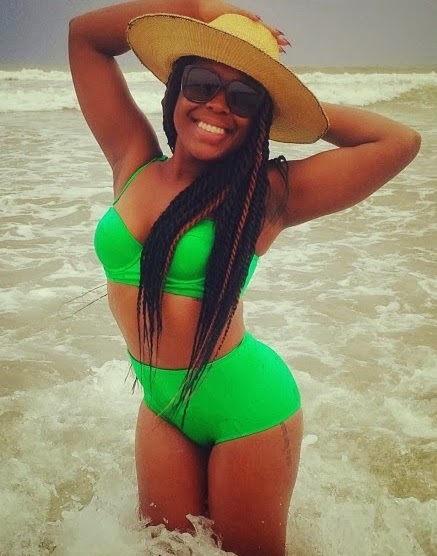 Moet Abebe in an interview with Thenationonline has said she sees no reason why people should refer her as a bad girl because she wears bikinis. She also talked about her supposed s*x tape, stating that a lot of people have been spreading false lies about a non-existing tape and if they have the link, they should go ahead to post it.

This is your first experience as an actress. What was it like for you?

It was very different and working on TV is obviously a completely different ball game. People do say that presenters naturally have this acting flair. But being a presenter, you always have to, in a sense, show who you are. You have to be real because you have to shine. But when you are an actress, you have to play the part. You have to be a different character; so, it was awesome. It was a bit challenging, but it was a very interesting experience.

As one who is known for being on TV, did you have to go through a transition process?

did because as I said, it was a completely different ball game. Understanding how the production works was completely different from TV; so, I had to go through that process of realising that if a camera is in a particular position, you have to face that way. But for TV, it is just head on straight to the camera; they are very different worlds.

You played the role of a bad girl on campus. How challenging was it?

Honestly, I would like to say that Tiwa was, in a sense, like my alter ego. So, it wasn’t necessarily a new thing for me to be a bit of a tough bad girl; and at the same time, it was different for me because I’ve never really had relationship issues like that. So, I kind of relate to the feistiness and the restiveness of the character, Tiwa. I can completely relate to that.

In the real world, are you comfortable being tagged a bad girl?

It depends on the sense in which people call me that. If it is in that Tiwa sense, then, the answer is no because that is an entirely different thing. That is why I said people kept on telling me that my personality and everything about me is very different from Tiwa. I’ve never had issues that I had to run over to my boyfriend’s house and start causing a scene. If you look at it that way, then, it is no. But if it’s the whole being a bad girl who stands up for what she believes in and for what she stands for, then, yes, I am a bad girl.

There are people who would argue about that…

(Cuts in) In what sense?

In the sense of what they hear about you. For instance, you have repeatedly been pictured almost nu*de…

(Cuts in) How does wearing a bikini make me a bad girl? Well, they need to go and study the dictionary and realise what a bad girl really is. Someone like Rihana can be termed a bad girl, but Moet Abebe is not a bad girl.

Have you seen it? Exactly! So, that is your answer. I have never posted anything like a s*x tape on the Internet. At the end of the day, as far as there is no link, there is no evidence of a s*x tape. People will always talk and I have learnt to live with that.

How do you react when you hear such news?

I guess you could ask the same question. How do they live with such news that they spread about other people?

She also spoke about who she is…

Who is Moet Abebe?

Moet Abebe is a girl, who is very driven and focused by what she wants to achieve in life. She is a hard worker. She is the kind of person who is always going to accept when she is wrong and always tries to get better at what she does.

Is Moet your real name?

My name is Laura Monyeazo Abebe.

Where are you from?

Are you related to the late ex-First Lady, Mrs. Stella Obasanjo?
Yes, I am related to her.