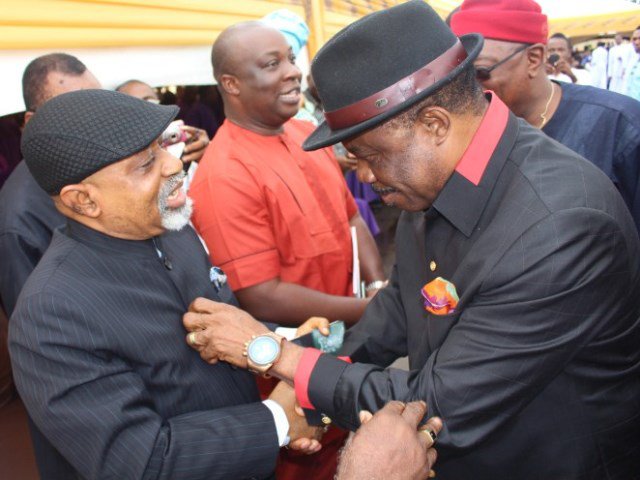 The Senator representing Anambra Central, Dr. Chris Ngige, has congratulated Governor Willie Obiano for his victory at the Supreme Court on Monday, but described it as a “verdict of humans”.

Ngige in a statement on Tuesday in Awka, which was made available to reporters, enjoined the people of Anambra state to support Obiano to succeed.

He also commended his supporters for their resilience, massive unrelenting support, which had always been there for him in all his electoral engagements and political duels in the state.

The apex court had on Monday upheld the election of Obiano as governor of Anambra, dismissing the appeals filed by Ngige and Comrade Tony Nwoye of the Peoples Democratic Party.

The statement signed by Ngige reads: “This Supreme Court judgment and other judgments of the various lower courts that upheld an election which the Independent National Electoral Commission (INEC) had admitted fell below expectations for me is a verdict of humans.

“The judgment of the good people of Anambra has been long delivered to me since the day voters from Idemili North, Idemili South, Awka South, Ogbaru local governments (Okpoko) and my other strong holds were disenfranchised on that fateful November 16, 2013.

“We all as mortals will now wait for the Most Supreme and eternal judgment of the Almighty God on this same matter at His appointed time. God is great and wonderful.

“However, having been declared the ‘legal winner’ of that election, I hereby congratulate Mr. Willie Obiano and wish him well in his new assignment. I also use this medium to request all Anambra people irrespective of political party or religious affiliations, to cooperate with him in the discharge of the onerous functions of his office.

“As for my numerous supporters across the state, we have all fought a good fight and the future holds out a better tomorrow than yesterday.

“I therefore wish to thank them for their resilience, massive and unrelenting support, which has always been there for me in all my electoral engagements and duels in our state”, the Senator stated.