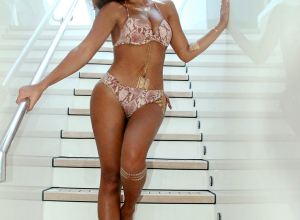 With recent rumors emerging that the queen of American R&B music — Beyonce, might be pregnant again; she decided to prove otherwise.

Music superstar Beyonce put all reports to rest by posting photos of herself in a sexy snakeskin print bikini, while on vacation with hubby Jay Z, daughter Blue Ivy Carter and mother Tina Knowles.

The rumors began very serious recently when Jay Z changed the lyrics to a song on the final leg of their On The Run tour.

Queen Bey who turned 33 on September 4th, also marked her day by lounging on a yacht and taking in the sun on the beach.