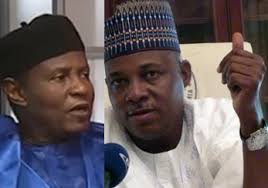 According to a statement by the Permanent Secretary, Borno State Ministry of Home Affairs, Information and Culture,  Alhaji Abba Fugu, there was no truth whatsoever in the media report that the duo had irreconcilable differences.

The statement read, “Borno State Government has noted with serious reservation, some media reports in recent days, suggesting that the Secretary to the State Government, Ambassador Baba Ahmed Jidda, was getting ready to resign from the cabinet over purported disagreement between him and Governor Kashim Shettima”.

Fugu said such insinuation was baseless but “however, some aspects of the Nigerian media have revisited the issue today (yesterday) Monday, September 22, 2014, hence the need to issue this statement to put the records straight”.

The Perm. Sec. said the initial action was not to take it serious but  for “the avoidance of any doubt, Governor Kashim Shettima and the Secretary to the Borno State Government have a perfect relationship that is evident to anyone conversant with happenings within the Government”.

He added, “There was never an issue of the governor contemplating the sacking of the SSG or the SSG contemplating resignation. We simply do not know the origin of the entire story even though it appears to be the handiwork of some mischief makers, who may be desperate to create an impression that all wasn’t well with the Government of Borno State in order to advance whatever political motive that could be in the offing.

“There is very high mutual respect and cordiality between the Governor and the SSG as they assiduously work to better the lives of Borno people through exemplary governance”.