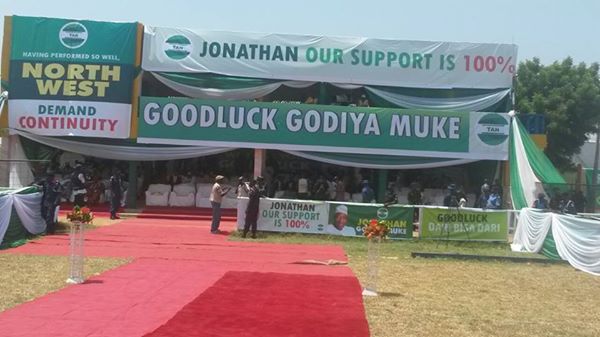 The final edition of the zonal rallies held in Kano yesterday by the Transformation Ambassadors of Nigeria (TAN) to drum up support for President Goodluck Jonathan’s re-election, was shunned by most governors from the North-West zone.

Only Governor Ibrahim Shema of Katsina State was at the Northwest leg of the rally held at the Kano Polo Ground, although, PDP controls Katsina, Kaduna, Kebbi, and Jigawa in the geopolitical zone.

Governor Muktar Yero of Kaduna was represented by his deputy, Ambassador Nuhu Bajoga.

Speaking at the rally, Governor Shema pledged the support of the people of the state for President Jonathan in 2015 general elections.

“We, the Katsina people, are here because Katsina State is always in the forefront of Nigeria’s unity”, he said.

“We believe in Nigeria and I have no doubt in my mind that this nation will stand tall among the comity of nations if equity and justice is upheld”.

The governor also charged Northern politicians to come together and stand as one for the love of Nigeria, stressing that without peace and unity, nothing meaningful can be achieved in the country.

Dr. Khaliru Alhassan, Minister of State for Health, who spoke on behalf of Sokoto people, pointed out that, “President Jonathan is the latest gift for the North-West and he should be supported due to his tremendous achievements so far in the North-West and in the country in general”.

According to the minister, President Jonathan’s success at the 2015 polls “will solidify the unity of Nigeria”.

Ambassador Bashir Yuguda, Minister of State for Finance, who spoke for Zamfara State, said the Jonathan administration “has created an economy that is all inclusive enough to benefit all Nigerians irrespective of religious and ethnic background”.

Speaker after speaker pledged the support of their people Mr. Jonathan’s second term bid even as they declared him the candidate to beat.

The Secretary to the Government of the Federation, Senator Anyim Pius Anyim, who conveyed President Jonathan’s condolence message to victims of the recent Boko Haram attack at Federal College of Education (FCE), Kano, said 2,393,331 Nigerians from the North-West Zone have endorsed Jonathan for a second term in office.

Anyim, who also handed over TAN’s relief materials for bomb blast victims in the North-West Zone to Governor Shema, said in no distant time, Jonathan will personally be in Kano to commiserate with victims of the FCE bomb-blast.

The highlight of the event was the handing over of 2,393,331 signatures of citizens of the zone urging the president to run for the 2015 presidential election to Senator Anyim.