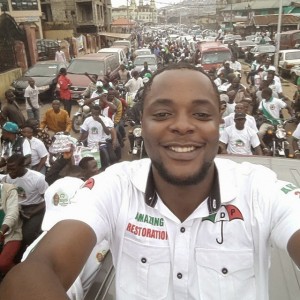 A lot of you might not remember him but I’ll refresh you memory a little. Olamiju Alao Akala was the dark skinned young gentleman whose wedding to Hadiza Okoya in Lagos recently was the talk of the town for weeks after the ceremony. The union between the two was much publicized due to the power-weight parents involved. Hadiza Okoya is daughter to Billionaire Okoye and Olamiju is the son of a prominent former governor in Nigeria. So……the former Governor of Oyo State’s son, Olamiju Alao Akala is presently on the streets of Oyo State campaigning for the re-election of his dad, who was once the State Governor. His father, Adebayo Alao Akala, will be contesting in 2015 with the PDP and a lot of big wings are actually supporting him this time. Who cares about politics right?!? Hehe…..