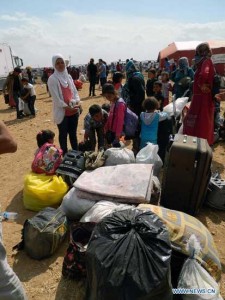 The situation in Syria seems to have even escalated after the involvement of the US military.

As you read this, over 160,000 Syrian refugees have entered Turkey to escape the extremist Islamic State (IS) militants in northern Syria since last Friday, Turkish Prime Minister Ahmet Davutoglu said on Friday.

The number of Syrian Kurds who have flooded to Turkey since last week has reached 160,335, Davutoglu said at the meeting of the ruling Justice and Development Party (AK Party) in Turkish capital of Ankara, adding that Turkey has taken steps that no other countries in the world has taken for those from Kobani, a Kurdish town across Turkish province Sanliurfa on Syrian side of the border that is home to some 400,000 people.

At least 105 villages around Kobani in northern Syria have been captured by IS forces since mid-September, according to the data from UN High Commissioner for Refugees (UNHCR).

Davutoglu stressed Turkey’s stance on the fight against IS in Syria, saying that Turkey will support any initiative or operation that brings an absolute solution to the terrorism problem, and will take the necessary stance if a palliative approach is adopted regarding the issue.

In the early hours of today, UNHCR said in a statement that it had stepped up its response to help Turkey provide aid to the Syrian refugees who have crossed into Turkey since Friday.

Turkey opened its frontier to cope with a rush of Syrian civilians from the Syrian border town of Ain al-Arab on Friday.

The Turkish authorities once refused the Syrians fleeing clashes between IS militants and Kurdish fighters to enter its soil, fearing of disability to shelter more refugees from the Syrian conflict.