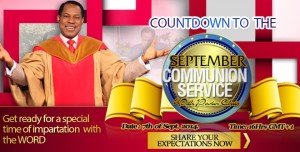 It’s been in the newspapers, magazines and online blogs and the topic is still hot and trending.

Pastor Christian Oyakhilome realized it was wise to discuss the issue as he addressed the allegations leveled against him after more than a week of maintaining silence on the divorce suit filed against him by his wife,

Speaking on Sunday evening during the monthly global communion service of the church, he said the allegations were “crazy” and “stupid”.

Oyakhilome acknowledged that divorce is unbiblical but suggested he could consider the option should his wife insist on it.

He also criticized the media for prying into his private life and urged members of his church to pray for his estranged wife.

Read his speech below: –

I understand that some media houses particularly in Nigeria and maybe in South Africa (I don’t know) but there are some of them that have been writing some real stupid things…real stupid things, and errrrhh…frivolous charges…that’s crazy.

2. Then you have a young man, a young prophet, he wasn’t named, he was deceived by another Man of God, and so he went in the direction God says don’t go.

That’s only the kind of thing you’d find about a Man of God when he misses the message of God or he acts beyond what God said. But a Man of God setting himself in defiance to the word of God and living like they (media houses) are writing those stupid things that I did this, that I did that…You don’t know what a Man of God is.. I don’t go in that direction. That’s crazy.

I wasn’t accused of those things you (media houses) said, nor did I commit those stupid thing that you said…and I don’t need to go to that level and such discussions. Jesus Christ was accused by many, with lots of frivolous charges. There would ALWAYS be those who’d like for it to be true, but you know, in spite of the accusations against Jesus, it didn’t change who he was!

There are preachers and there are Men of God. I’m not a preacher, I’m a Man of God…understand the difference. And I go in the way I’m asked to go, it may cause some troubles with individuals, but that’s not because I’ve done something wrong.

And when it comes to Rev. Anita, what I’d say to you is pray for her, don’t act like ‘why why why is she….’ . Married to a Man of God does not automatically make you Woman of God! You can make mistakes, but you know, people expect the wife of a Minister to definitely be at the level of the Minister, and so they may be looked upon and the expectations maybe like that, but it’s a positional thing! alright!

If a Man of God is married, it does not automatically mean the wife of the Man of God is therefore a Woman of God! That’s not how it is in the Bible. That’s why you don’t really find wives of Men of God listed in the bible. How many of them? Who was Peter’s wife? Did you ever know her name? You’d never find out! Who was John’s wife? Did you ever read the name? What about all the other apostles? How many are registered in the bible? You never find their names, why? Ask God when you find HIM! **Smiles

So, they are little things, don’t try to make something big out of them, and emmm.. we’re journeying, doing the things that God’s called us to do…Christians should not have a divorce, it shouldn’t be, but you see, that doesn’t mean a Christian may not take the step. They may do it, but that doesn’t make it right. And we shouldn’t take one another to court, but when it happens, not because we wanna go there, someone is taking us there.

That’s a problem, be wise, stay focused in the Word of God, and don’t let those who want to feast on things like this including Christians. You know there are Christians who like things like this, they wanna make something big about it. You should only say those things that are from God, and become honorable in your speech, Alright! …and judge nothing before the time…be wise, Glory to God.