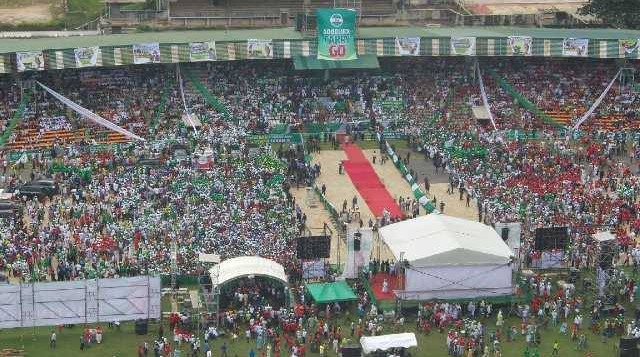 The national leadership of the Peoples Democratic Party, PDP, has asked members of the Transformation Ambassadors of Nigerians (TAN) and other support groups clamouring for President Goodluck Jonathan’s re-election in 2015, no to include officials of the party in their campaigns.

National Publicity Secretary of the party, Chief Olisa Metuh, who stated this in a statement he issued in Abuja on Sunday, said it was wrong to link officials of the party with the campaigns of the support groups.

It will be recalled that national, state and local government officials of the party had been actively involved in the many rallies organized by the TAN in South-East, South-South, South-West and North-Central parts of the country.

A cross-section of party officials, especially those believed to be eyeing the party’s presidential ticket, had viewed the active involvement of PDP stalwarts in TAN’s rallies as an indication that the ruling party might have closed its doors against any other presidential hopeful, thereby, paving the way for the emergence of Jonathan as its presidential candidate.

Metuh insisted that while the party recognised the inalienable right of citizens under the 1999 Constitution (as amended) to freely associate and publicly express their support for persons of their choice, he, however, said the party wished to restate in the strongest possible terms that no official of the PDP at any level should for any reason whatsoever, be involved in such events until after the PDP primaries.

He said, “In this regard, all support groups struggling for legitimacy, supremacy or recognition should henceforth desist from trying to actualize such by using names of officials of the PDP.

“The PDP issues this as a last warning to all such groups and will not hesitate to take strict measures against any further infraction on its integrity and that of its officials.

“For the avoidance of doubt, the leadership of the PDP recognizes that party officials as unbiased umpires have a sacred duty to observe the dictates of internal democracy and as such remain neutral until the emergence of candidates through our primaries in line with the provisions of the PDP constitution.

“Finally the national leadership wishes to state that whilst it has absolutely nothing against the activities and programmes of such groups, PDP officials as administrators of the party should not be involved in any way until after the primaries”.