Prophet T.B Joshua: “Collapsed Building: I Was The Target” 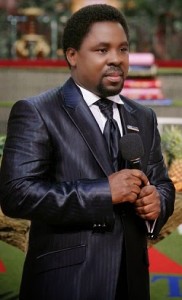 Yesterday was a bloody Sunday for members of the Synagogue Church of All Nations and for it’s head Pastor especially.

The head pastor — Prophet Temitope Joshua has come out to say that the uncompleted guest house which collapsed in his church premises on Friday was due to a strange aircraft which kept hovering around the building till it collapse an hour later.

While addressing journalists yesterday, the Prophet showed them a CCTV footage to prove his point.

He also went further to disclose he was the target of the ‘attack’.

Members cannot be the target, the easier way to stop this church is to get the head and from my explanation, you know the truth” he said.

He also called on security agents to study the CCTV footage as they investigate the incident.

He promised to speak further on the incident during church service this morning.

Nollywood actress Ijeoma Thomas has shared some of her experiences as an actor and producer. According to the beautiful actress/producer she was once embarrassed over...
Read more
- Advertisement -