A new research has revealed that the deadliest Ebola outbreak in the history of mankind could spread to no fewer than 15 countries in West and Central Africa.

The research, carried out by the University of Oxford, also stated that up to 70 million people would be at risk of infection.

It was gathered that the study compared historic outbreaks to the virus’ possible transmission in bats and chimpanzees to predict how the disease could spread through its vast animal reservoir. 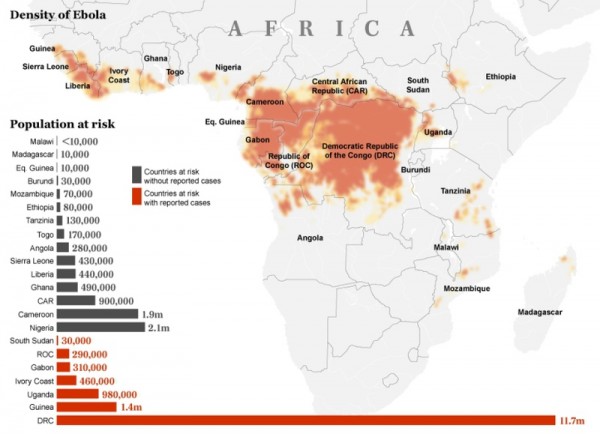 According to reports, it is the first time scientists have attempted to explain how the virus, which is contracted through contact with infected bodily fluids, has travelled westward across Africa.

The resulting map shows how the populations of the Central African Republic, Cameroon, Ghana and a dozen more countries could be hit by the outbreak, which has already killed nearly 2,300 people in 2014, according to latest estimates released on Tuesday, 9 September, 2014 by the World Health Organisation, WHO.

Earlier studies on the Ebola Virus Disease, EVD, have revealed that several species of bat are suspected of carrying the virus through the jungles of West and Central Africa without showing symptoms, passing the disease onto other animals which are eaten by some communities as “bush meat”.

Researchers said transmission to the human population was not “inevitable”, but that environmental factors in many more countries than previously considered made it possible for further Ebola outbreak outbreaks.

More than 1,000 people have so far died in Liberia, where the country’s Defence Minister Brownie Samukai has said the disease threatens the country’s very existence.

“Liberia is facing a serious threat to its national existence. The deadly Ebola virus has caused a disruption of the normal functioning of our State,”  the minister said on Tuesday.

It would be recalled that more deaths have been reported in Sierra Leone, Nigeria and Guinea and one case has recently been confirmed Senegal.

“Our map shows the likely ‘reservoir’ of Ebola virus in animal populations, and this is larger than has been previously appreciated,” Oxford study’s author Nick Golding, a researcher at the University’s Department of Zoology, said.

“This does not mean that transmission to humans is inevitable in these areas; only that all the environmental and epidemiological conditions suitable for an outbreak occur there,” Golding added.

No fewer than seven people have died from the Ebola virus in Nigeria since the late Patrick Sawyer brought the deadly disease into Lagos on 20 July, 2014.