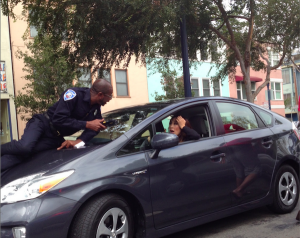 A woman in San Francisco was arrested and charged with assault last week after she allegedly tried to run over a parking enforcement officer who was giving her a ticket. When he jumped onto her car to avoid being hit, she reportedly drove around the city with him clinging to the hood.

An eyewitness snapped a photo of the Department of Parking and Traffic officer atop the hood of Monsoumbath’s Prius and sent the image to the Hoodline website.

“I saw her go by and realized there was a guy on the hood on his back, hanging on kind of spread-eagled,” the witness, Allison Y., told Hoodline. “She turned right from that far left lane across all lanes of traffic onto Octavia. We caught up to her around Market — she was screaming, he was screaming, it was insane.”

But Monsoumbath said there was a reason for the wild ride. She told KRON 4 she was sexually harassed by the officer.

Monsoumbath said the officer, who has not been identified, asked her to “do things instead of getting a parking citation which led me to believe he was posing as a meter maid.” She said she stopped several times, but the officer wouldn’t get off the car.

“I am still shaken up by the whole situation. I was sexually harassed then had a man jump on my car. I never tried to run that meter maid over. It’s clear I’m at a stop in the pic and I made several stops,” she told the station.

Monsoumbath is facing a felony charge of assault with a deadly weapon (her Prius) and a misdemeanor charge of hit and run, according to KRON 4.