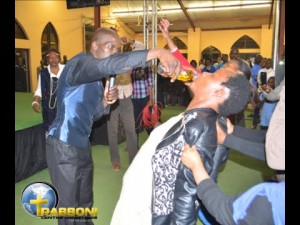 Thus is just crazy, the thing people would do just because their spiritual leader tell them to is amazing!!!

The same Pastor who asked his congregation to eat grass this January is the same person behind this crazy act.

Lesego Daniel is back at it again and this time he fed his Rabboni Ministeries congregants petrol, literally pouring it down their throats.Some said it they liked it, they feel ‘nice’, while others said it tasted like pineapple juice, some said it was like blood, others simply fainted.

In the video’s opening, he implied he is of a higher anointing, and others shouldn’t try this until they can turn water to wine. This is in reference to a Bible passage where Jesus converted the drink for a wedding.