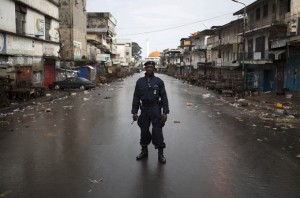 In a bid to combat the fast spreading Ebola virus, Sierra Leone’s government has ordered the indefinite quarantine “with immediate effect” of three districts and 12 tribal chiefdoms – this would lead to more than one million people being quarantined.

The President — Ernest Bai Koroma, in a national televised address on Wednesday, stated that the northern districts of Port Loko and Bombali were to be closed off along with the southern district of Moyamba – effectively sealing off about 1.2 million people.

Before this announcement, the eastern districts of Kenema and Kailahun were already under quarantine, more than a third of the population of six million, in five of the nation’s 14 districts, now finds itself unable to move freely.

“The isolation of districts and chiefdoms will definitely pose great difficulty but the lives of everyone and the survival of our country takes precedence over these difficulties,” Koroma said.

“These are trying moments for everyone in the country.”

The deadliest Ebola epidemic on record has infected more than 6,000 people in west Africa and killed nearly half of them, according to research and reports from the World Health Organisation’s (WHO) latest figures, released on Thursday.

The spread of the Ebola virus appears to have stabilized in Guinea, where the outbreak originated, but the rising trend in the spread of the virus is continuing in Sierra Leone and Liberia, the WHO said on Thursday.

“The situation in Guinea, although still of grave concern, appears to have stabilised: between 75 and 100 new confirmed cases have been reported in each of the past five weeks,” WHO said in a statement.

The virus can fell its victims within days, causing rampant fever, severe muscle pain, vomiting, diarrhoea and – in many cases – unstoppable internal and external bleeding.

In Sierra Leone, Ebola has infected 1,813 people, killing 593, according to WHO.

Koroma said that 12 of the county’s 149 tribal chiefdoms – much smaller administrative areas than districts – were also to be placed in quarantine.

The total population in these areas was not immediately clear.

The president said corridors for travel to and from non-quarantined areas had been established but would only operate between 9:00am and 5:00pm.

“The Ministry of Health and Sanitation and the emergency operation centre will establish additional holding centres in the quarantined chiefdoms,” Koroma said.

The move follows a three-day countrywide lockdown at the weekend that Koroma said had been a success but exposed “areas of greater challenges”.