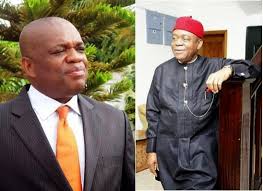 Governor Theodore Orji of Abia State has warned his predecessor, Dr. Orji Uzor Kalu, “to stop running down his administration using his (Kalu’s) paper as a conveyor belt”.

Orji, who took exceptions with a media report credited to Anambra-born billionaire politician, prince Arthur Eze, alleging that “Abia stinks”, accused the ex-governor of using his medium to “twist the truth and propagate falsehood”.

Dr. Uzor Kalu is the owner of The Sun Publishing Limited, publishers of The Daily Sun newspaper.

Briefing journalists yesterday in Umuahia, the state capital, Commissioner for Information, Eze Chikamnayo, said billionaire politician, Prince Eze, was quoted out of context by Kalu’s paper in his bid to further rubbish the efforts of the present administration to reposition the state.

According to Orji, the Anambra billionaire, who spoke during the Abia @ 23 celebration, was only expressing his dissatisfactions with the deplorable condition of the Enugu-Port Harcourt expressway, and never referred to Abia internal roads as misrepresented by the said report.

“From what Arthur Eze said, it was obvious he was voicing his concern about the state of the Enugu-Port Harcourt express way since he drove in from Enugu and passed through the Okigwe section of the highway which is in a very terrible state”, Orji said.

Orji noted that even members of the Abia State House of Assembly had recently passed a motion calling on the Federal Government to speed up the repair of the highway which has been on slow pace, adding that he had also been positively engaging the FG on key developmental projects in the state.

Orji said it was unpatriotic of “the former Governor to use his paper to turn Arthur Eze’s candid remarks to mean that Abia stinks”, a comment he said Eze had denied when contacted.

Orji contended that his administration had made remarkable success in infrastructural developments as well as improving the standard of living of Abia residents.

According to the governor, his predecessor in office ought to be a shining example of patriotism and warned him to desist from “his campaigns of calumny against the state government or we will be forced to use every legal means to call him to order”.

“It is only obvious that Kalu is intimidated by the towering achievements recorded by the current administration in Abia, a feat which could not be achieved in his eight years of maladministration”, he added.