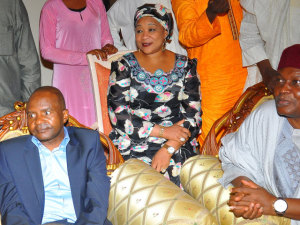 Recuperating Governor of Taraba State, Danbaba Suntai, on Thursday said he did not return to the country because of the forth coming Peoples Democratic Party’s governorship primaries, as being speculated.

Suntai, in a statement signed by his Chief Press Secretary, Hassan Mijinyawa, noted that “series of publications were being circulated by individuals and faceless groups on his return which were not considered as freedom of speech”.

He said the clarification became necessary because the people of Taraba State deserve “good conducts” from their politicians.

The governor on Saturday returned from the United Kingdom after over two months of medical checkup following injuries he sustained when his plane crashed near Yola, Adamawa state in 2012.

Speculations were rife that Suntai “rushed” back to the country because of the forthcoming PDP governorship primaries, after which he would return to the UK to continue his medical treatment.

The statement said: “It has become pertinent to call on such individuals and groups to keep Governor Danbaba Suntai out of their political permutations and mischief.

“Suntai secured the mandate of the good people of Taraba State twice and has performed admirably well. He is not contesting for any election”.

He also spoke on why his deputy, Garba Umar, was not allowed to see him at the Abuja Airport upon his return, warning politicians to desist from sowing seeds of discord.

“The Federal Airports Authority of Nigeria (FAAN) handles all security issues at the airports and also permissions for non-airport staff to be on the tarmac at any point in time.

“It is therefore, misinforming for an individual and faceless groups to apportion blame on certain personalities as being responsible for Garba Umar’s inability to see the governor at the airport.

“Umar is better placed than any Taraba person to see Governor Suntai in Abuja or anywhere.

“Umar approved the arrangement and paid for the aircraft that brought the governor to Abuja. The details of the flight were known to him (Umar). He knew when the plane took off and when it was going to land”, the statement stated.